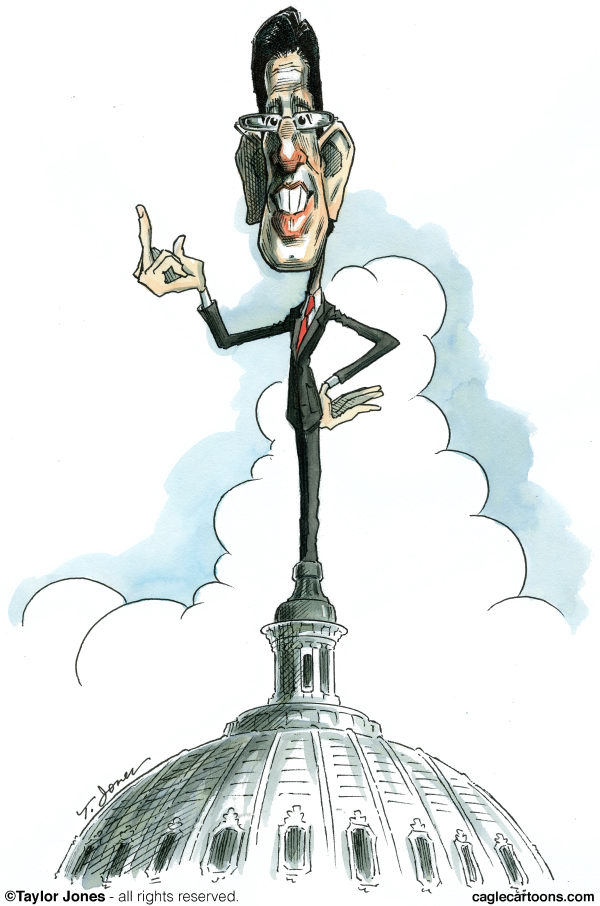 The GOP-Tea Party Republicans have developed a new procedure, a new approach, a new policy for responding to disasters. When money is needed as a remedy for a potential disaster, the GOP-Tea Party Republicans will not lend support for the needed money or assistance unless the agenda that they want is also attached. This tactic was used during the debt-ceiling crisis. Eric Cantor has now says that "the GOP approach would break from how U.S. policymakers have operated." AlterNet has the story of GOP's Callous, Money-Oriented Response to Storm Damage: "It is Sinful"

Hurricane Irene made landfall this morning, hitting North Carolina with sustained winds of 90 miles per hour. Irene was downgraded overnight to a Category 1 hurricane, but it remains a powerful storm capable of doing serious harm.

Obviously, we can all hope the severity of the damage is limited. Regrettably, though, the line on federal disaster aid from congressional Republicans has not changed.

This week, House Majority Leader Eric Cantor (R-Va.) said the GOP approach would break from how U.S. policymakers have operated. Whereas Congress used to provide emergency funds after a disaster, without regard for budget caps or offsets, Republicans have said they will no longer accept such an approach -- if Democrats want emergency assistance in the wake of a natural disaster, Republicans will insist on attaching some strings to the relief funds.

In this case, the strings are cuts elsewhere in the budget. Or as Cantor's spokesperson put it, GOP leaders expect "additional funds for federal disaster relief" to be "offset with spending cuts."

"It is sinful to require us to cut somewhere ... in order to provide emergency disaster assistance for American citizens," Rep. Cedric Richmond (D-La.) told The Huffington Post on Friday.

The Louisiana Democrat pointed out that this weekend is the sixth anniversary of Hurricane Katrina, which devastated his district and cost the federal government more than $100 billion. That recovery effort would have been delayed "by years" if Congress had required the same kind of spending cuts to offset aid, he said.

"I have been one who has been preparing for the hurricane, trying to give people some comfort. One thing they need to know is the federal government can come to their aid," Richmond said. "I don't think we're in a position, given the rules set up by the majority, that we're going to be able to come to their aid quickly."

Perhaps realizing the potential for a political nightmare -- Republicans are already unpopular; just wait until they hold hostage relief funds for communities hit by a hurricane -- GOP leaders weren't eager to talk about their position yesterday.

But they didn't disavow it, either. Cantor's office rejected questions about "hypothetical federal aid caused by hypothetical damage," despite the fact that the Majority Leader and his spokesperson were more than willing to discuss the position 24 hours earlier.

House Speaker John Boehner's (R-Ohio) office was also cagey, saying policymakers will "discuss costs when and if they occur."

Neither Republican leader offered the correct response, which is, "Of course we'll do whatever it takes to help the affected communities."

With any luck, this will be a moot point. If the damage isn't severe, Congress won't have to approve emergency relief. At this point, we just don't know.

But in the event of extensive damage, there's a real possibility that the first question from congressional Republicans won't be, "How can we help?" but rather, "What will Democrats give us in exchange for disaster aid?

Paul Krugman has astutely observed that this behavior is analogous to a hostage situation.

Six months ago President Obama faced a hostage situation. Republicans threatened to block an extension of middle-class tax cuts unless Mr. Obama gave in and extended tax cuts for the rich too. And the president essentially folded, giving the G.O.P. everything it wanted.

Now, predictably, the hostage-takers are back: blackmail worked well last December, so why not try it again? This time House Republicans say they will refuse to raise the debt ceiling — a step that could inflict major economic damage — unless Mr. Obama agrees to large spending cuts, even as they rule out any tax increase whatsoever.

Legislators have historically been willing to compromise. Krugman notes what has changed?

The answer is the radicalization of the Republican Party. Normally, a party controlling neither the White House nor the Senate would acknowledge that it isn’t in a position to impose its agenda on the nation. But the modern G.O.P. doesn’t believe in following normal rules. [...] At some point — and sooner rather than later — the president has to draw a line. Otherwise, he might as well move out of the White House, and hand the keys over to the Tea Party.

The President did give in to the GOP-Tea Party agenda with tax cuts and the debt-ceiling. Now, there are catastrophic costs for disaster relief. The response of the GOP-Tea Party is to have another hissy fit, hold their breath till they turn blue and claim there will be no money unless their strings are attached.

I hear conservatives continually criticism liberals for a negative attitude toward them. But sometimes, truth is merely truth. And if negativity stems from the truth, then one should look at the behavior emanating from the actor or participant of the action rather than the observer of the facts. It is time to put the children to bed without their supper and just say NO to being held hostage. Yell as loud as you can, "Right back at you Cantor!!!!"

Please help me by reading my appeal on my profile