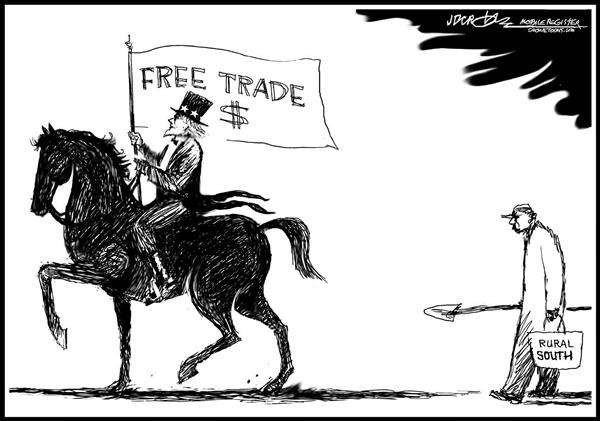 The North American Free Trade Agreement, NAFTA,, was signed into law by President Bill Clinton in 1994. It was touted as a way to strengthen the economy while creating U.S. middle-class jobs. The theory of a free trade agreement is that it will allow faster and more business between the two countries which will benefit both.

President Clinton used the method of triangulation to work with Republicans in creating free trade legislation that would pass Congress. When NAFTA was first signed in 1994, proponents said it would eventually create jobs for the U.S. economy. In signing a NAFTA side agreement in 1993, several months before signing the agreement into law, President Clinton explained way he thought trade agreements were important.

I believe that NAFTA will create a million jobs in the first five years of its impact. And I believe that that is many more than will be lost...

However, on March 19, 2010, former President Clinton admitted that the policy underlying the free trade agreement with Haiti was a mistake and a failure. As the UN Special Envoy to Haiti, he apologized for having imposed free trade on Haiti during his first term in office.

This policy "may have been good for some of my farmers in Arkansas, but it has not worked. It was a mistake," Clinton told the Senate Foreign Relations Committee. "I had to live every day with the consequences of the loss of capacity to produce a rice crop in Haiti to feed those people because of what I did; nobody else."

Seventeen years after NAFTA was signed into law, there are new estimates that trade agreements have the cost the American worker hundreds of thousands of job losses.

According to a report by Economic Policy Institute economist Robert Scott, entitled "Heading South: U.S.-Mexico trade and job displacement after NAFTA," an estimated 682,900 U.S. jobs have been "lost or displaced" because of the agreement and the resulting trade deficit.

In light of the concrete evidence that NAFTA has created, not jobs, but job losses for the American worker, there are presently three trade agreements with Panama, South Korea and Colombia pending before Congress.

Yet, in light of this evidence and along with President Bill Clinton's revelation regarding the effect of a trade agreement with Haiti, here’s how President Obama describes the three NAFTA-style free trade agreements that Congress is attempting to ratify later this month, one with Panama.

There are a few things that we can and should do right now to redouble our efforts on behalf of the American people. Today, Congress can advance trade agreements that will help businesses sell more American-m­ade goods and services to Asia and South America, supporting thousands of jobs here at home.

The evidence is substantiated that NAFTA continues to lose jobs for U.S. workers.

Jobs continue to be lost to NAFTA today. In the years 2007-2010, the U.S. economy has lost 116,400 as a result of the trade deficit created by NAFTA. And last year, the growth of Mexican auto exports to the United States alone created more Mexican jobs -- 30,400 -- than the entire U.S. auto industry.

It's the U.S. manufacturing sector that has suffered most mightily from NAFTA, alone accounting for 60.8 percent -- 415,000 total -- of the jobs lost to the agreement. Specifically, those making computer of electronic parts have accounted for 22 percent of all job losses, and motor vehicle and parts workers accounted for 15 percent of job losses.

Job losses haven't been limited to certain geographic regions, either, as all fifty states have lost jobs as a result. And while the states with the largest total number of job losses, California and Texas, do hug the southern border, it's actually manufacturing-heavy states to the north, such as Michigan, Indiana and Kentucky, that have lost the largest share of jobs to Mexico.

The below chart tracks jobs displaced as share of total state employment: Why would President Obama support this trade agreement legislation? Dylan Ratigan proffers a suggestion about politicians and trade agreements on his blog:

If you want to know why politicians are so eager to pass a free trade agreement with Panama this month, type “Panama offshore banks” into Google and look at the paid ads. What you’ll see is advertising by law firms and banks that will offer you help to set up a secret corporate structure in Panama immune from taxes.

Panama is too small as an economy to really impact jobs in the United States, the real value of the FTA is strategic and has to do with American geopolitical aims. For the business community, Panama is a great place to hide their money.

Is there any method to this madness? Banks, corporations and big business all want trade agreements and they always have more influence on politicians than the American worker does.