Straight from the Horses Mouth, or is that the Elephants Rear? 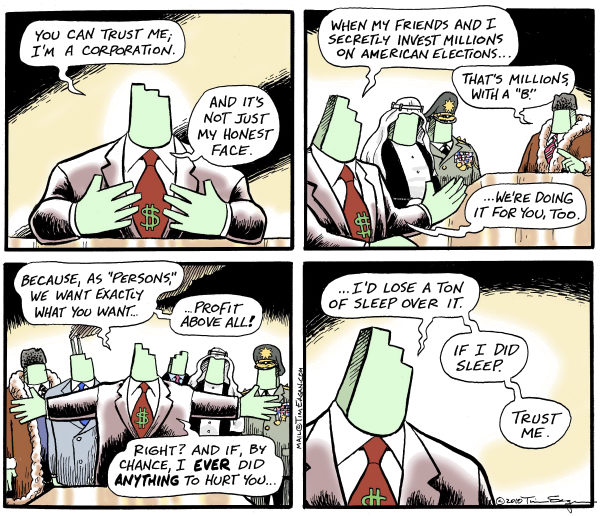 When former Massachusetts Gov. Mitt Romney (R) , the GOP frontrunner, was recently asked at the Iowa State Fair why he was focusing on entitlement reforms as a means of deficit reduction over asking corporations to share part of the burden, he said:

Then, Sen. Rand Paul (R-KY) went further than Romney and Palin by saying, “all of us are corporations.”

KEYES: What did you make of Mitt Romney’s statement today that “corporations are people”?

KEYES: Do you think that was basically in line with what he was saying?

PAUL: You think about, if you own a retirement fund, you have a 401k, everybody who has a 401k has parts of corporations, so in a sense we are.

KEYES: I think people might argue that corporations can’t be sent to jail.

PAUL: I think those arguments can be made, but I think the fact that a lot of times people want to vilify corporations, saying they’re someone else, that they’re these other rich people. They’re us. They’re the middle class. We all own parts of corporations.

You heard it straight from the horses mouth, or is that the elephants rear? These GOP Tea Party politicians want to protect the 'PEOPLE'S MONEY.' That means the Corporate Money with the Corporate Loopholes and the Corporate Tax Cuts. Because, you my friend... the little people.. don't have any money anymore to protect.
Posted by rross at 12:48 PM