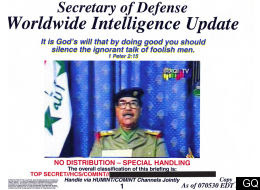 Think Progress comments on the Robert Draper article and exposé on Donald Rumsfeld in GQ magazine.

In a lengthy article on Donald Rumsfeld’s rocky tenure as Defense Secretary, GQ published never-before-seen cover sheets from top-secret intelligence briefings produced by Rumsfeld’s Pentagon. Starting in the days surrounding the U.S. invasion of Iraq, the cover sheets featured inspirational Bible verses printed over military images, “and were delivered by Rumsfeld himself to the White House” to the president, “who referred to America’s war on terror as a ‘crusade,’” GQ writes. Below are some examples of the Bible quotes:

“Therefore put on the full armor of God, so that when the day of evil comes, you may be able to stand your ground, and after you have done everything, to stand.” [The quote appears over an image of a tank at sunrise]

“Commit to the LORD whatever you do, and your plans will succeed.” [The quote appears over an image of a soldier in Baghdad]

“It is God’s will that by doing good you should silence the ignorant talk of foolish men.” [The quote appears over an image of Saddam Hussein]

“Open the gates that the righteous nation may enter, The nation that keeps faith.” [The quote appears over an image of tanks entering an Iraqi city]

GQ’s Robert Draper writes that when colleagues complained to the Pentagon official who came up with the cover sheets, he replied, “‘my seniors’ — JCS chairman Richard Myers, Rumsfeld, and the commander in chief himself – appreciated the cover pages.”

Hullabaloo helps us remember The Bush Crusades with a remark from September '01 which was "no idle slip of the tongue."

On Sunday, Bush warned Americans that "this crusade, this war on terrorism, is going to take awhile."

And also:In the programmeElusive Peace: Israel and the Arabs, which starts on Monday, the former Palestinian foreign minister Nabil Shaath says Mr Bush told him and Mahmoud Abbas, former prime minister and now Palestinian President: "I'm driven with a mission from God. God would tell me, 'George, go and fight those terrorists in Afghanistan.' And I did, and then God would tell me, 'George go and end the tyranny in Iraq,' and I did."

TO paraphrase Al Pacino in “Godfather III,” just when we thought we were out, the Bush mob keeps pulling us back in. And will keep doing so. No matter how hard President Obama tries to turn the page on the previous administration, he can’t. Until there is true transparency and true accountability, revelations of that unresolved eight-year nightmare will keep raining down drip by drip, disrupting the new administration’s high ambitions.

There are many dots yet to be connected, and not just on torture. This Sunday, GQ magazine is posting on its Web site an article adding new details to the ample dossier on how Donald Rumsfeld’s corrupt and incompetent Defense Department cost American lives and compromised national security. The piece is not the work of a partisan but the Texan journalist Robert Draper, author of “Dead Certain,” the 2007 Bush biography that had the blessing (and cooperation) of the former president and his top brass. It draws on interviews with more than a dozen high-level Bush loyalists.

Draper reports that Rumsfeld’s monomaniacal determination to protect his Pentagon turf led him to hobble and antagonize America’s most willing allies in Iraq, Britain and Australia, and even to undermine his own soldiers. But Draper’s biggest find is a collection of daily cover sheets that Rumsfeld approved for the Secretary of Defense Worldwide Intelligence Update, a highly classified digest prepared for a tiny audience, including the president, and often delivered by hand to the White House by the defense secretary himself. These cover sheets greeted Bush each day with triumphal color photos of the war headlined by biblical quotations. GQ is posting 11 of them, and they are seriously creepy.

Robert Draper acknowledged that Rumsfeld didn't flaunt any religiosity and disclosed what his motivation was in adorning the cover sheets with scripture.

The Scripture-adorned cover sheets illustrate one specific complaint I heard again and again: that Rumsfeld’s tactics—such as playing a religious angle with the president—often ran counter to sound decision-making and could, occasionally, compromise the administration’s best interests. In the case of the sheets, publicly flaunting his own religious views was not at all the SecDef’s style—“Rumsfeld was old-fashioned that way,” Shaffer acknowledged when I contacted him about the briefings—but it was decidedly Bush’s style, and Rumsfeld likely saw the Scriptures as a way of making a personal connection with a president who frequently quoted the Bible.