GOPin' All Over Themselves, Once Again... 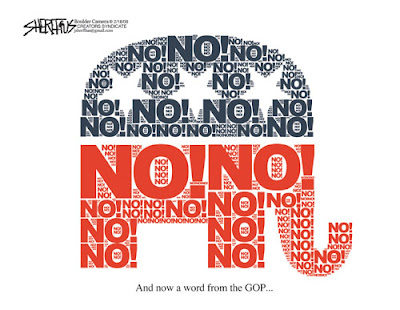 Justice David Souter has informed The White House that he will be resigning at the end of this court session.President Obama has not yet placed anyone’s name in nomination to replace Justice Souter’s. In fact, the President has not yet even suggested any names. Nonetheless, the Republicans have announced that they are “gearing up for a fight.”

GOP Gears Up for Court Fight

Senate Republicans admit they have virtually no shot at stopping President Barack Obama’s pick to replace Supreme Court Justice David Souter — but they see a definite political upside in waging a fight...

Conservatives Gear Up For SCOTUS Fight

A group of more than 50 conservative groups held a conference call early Friday to begin plotting strategy, sources on the call said.

"You're already having chatter between conservatives on who is going to be the nominee, what type of nominee is going to be put forward by President Obama," said Brian Darling, the Heritage Foundation's Senate director and a former top Judiciary Committee staffer...

Phone lines around Washington began burning this morning as conservative organizations kicked off preparations for the fight over President Obama's eventual Supreme Court nominee. Associate Justice David Souter's decision to step down at the end of this term has awakened a long-dormant network of conservative organizations that will do their best to augment — and at times pressure — Senate Republican efforts to frame Obama's eventual choice...

This week the Republican party kicked off its campaign to shine its party image.

Three prominent GOP leaders kicked off a campaign Saturday to reshape their party's image, gathering at a restaurant in northern Virginia for the first of a series of town hall meetings. The goal of the initiative, called the National Council for a New America, is to connect Republican leaders with voters across the country to help get the party's electoral fortunes back on track. "Certainly our party has taken its licks the last few cycles, but that's why we're here," House Minority Whip Eric Cantor said...

"I would say you can't beat something with nothing. The other side has something. The GOP isn't listening to the advice of Jeb Bush. They are certainly trying to beat the Democrats with 'nothing.'

But once again the Senate Republicans have defined themselves as the "Party of NO." They have become the obstructionist political party. It appears that it doesn't matter to the Republicans who Obama's nominee for the Supreme Court might be.
The Republican Party is gearing up for a fight, because that is what “The Party of NO!” does. Legions of traditional Republicans are feeling disenfranchised by a party taken over by the Neo-Cons, the crazy Christian Right (who are neither) and the likes of Rush Limbaugh, Bill O'Reilly, Sean Hannity and that 'drooling cretin' Glenn Beck.

Traditional Republicans as well as most Americans have grown tired of the constant chorus of fear and hate mongering. The GOP non-message has become repugnant. And the response by the Senate Republicans...”NO!” No to what? They don’t even know yet, but by simple knee jerk reaction, they scream out...”NO!”

Great job at polishing their image!