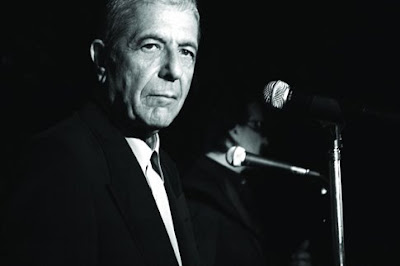 Via The Jewish Daily Forward

Buddhist monk, Jewish poet, famed philanderer and now the subject of political protest, Leonard Cohen performed at New York City’s Radio City Music Hall on May 17. The elusive Canadian folk-rock legend, on his first major tour in 15 years, worked the capacity crowd of 6,000 fans who shouted out and sang along through three hours of his trademark songs of despair, doom and failed love. Now 74, Cohen bounced around the stage with more energy than he ever displayed as a young singer in the 1960s.

The excitable scene has been repeated in scores of cities, during a yearlong tour that has taken him as far afield as Moscow; Berlin; London, and Melbourne, Australia.

The New York event, however, featured one new element that reportedly had Cohen’s handlers on edge: a group of about three dozen pro-Palestinian protesters standing across the street from the theater entrance, calling on the singer to cancel a concert in Israel that is expected to take place in September.

The demonstrators, organized by local pro-Palestinian organizations and at least one left-wing Jewish group, spent an hour and a half chanting and singing improvised songs addressed to Cohen. A typical song, “Don’t Play Israel, Leonard Cohen,” was sung to the tune of “Hava Nagila.”

It is interesting that "Hava Nagila" means "Let's Rejoice!" It is a song of celebration. Any group, whether pro-Palestinian or Left-wing Jewish, using this song as a foundation for their protest seems to negate the very meaning of the song.

Here are the words:

Let's rejoice and be happy

Let's sing and be happy

Awake brothers with a happy heart

With a happy heart

Maybe these groups should go inside and listen to a Leonard Cohen concert. His response to all this might be found in his closing song.

The concert’s closing song, “Whither Thou Goest,” is lifted word for word from the Book of Ruth. It ends with evocative words that easily could have been his response to the protesters outside: “Thy people shall be my people.”