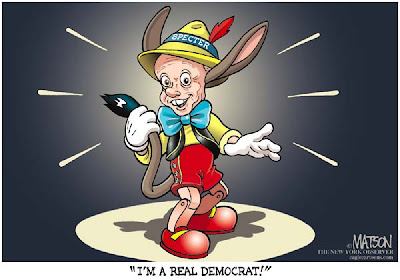 Specter: ‘I Did Not Say I Am A Loyal Democrat’

Shortly after news leaked that Sen. Arlen Specter would be switching from the Republican to the Democratic Party, media reports quoted Specter telling President Obama he would be a “loyal Democrat” who would support his agenda:

At 10:32am, President Barack Obama reached Specter and told him “you have my full support” and “thrilled to have you.”

Specter told the president, “I’m a loyal Democrat. I support your agenda.”

Specter immediately exhibited his loyalty by restating his opposition to Dawn Johnsen, Obama’s nominee to head the Office of Legal Counsel, and by joining every Republican in Congress in voting against the president’s budget.

Today on Meet The Press, host David Gregory asked Specter if he would be supporting Obama’s health care plan given reports of his loyalty to Obama’s agenda. “No,” Specter said, adding that he never said he would be a “loyal Democrat”:

GREGORY: It was reported this week that when you met with the president, you said, “I will be a loyal democrat. I support your agenda.” Let me test that on probably one of the most important areas of his agenda, and that’s health care. Would you support health care reform that puts up a government run public plan to compete with a private plan issued by a private insurance company?

Trying to clarify Specter’s position on Obama’s health care reform, Gregory then asked, “You would not support a public plan?” “That’s what I said and that’s what I meant,” Specter replied.