The Issue of Torture 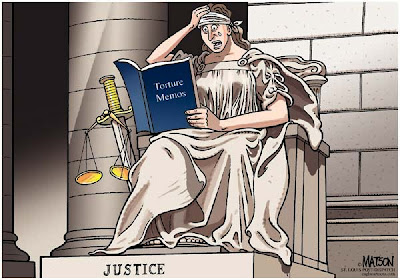 According to Glenn Greenwald, "(t)his is a perfect illustration of how severely our political spectrum has shifted in the last two decades and how depraved and extremist our political and media classes have become."

It's literally true that if you say today verbatim what Ronald Reagan said in 1988 about torture and the need to prosecute those who do it, then you are immediately and by definition a rabid score-settler from the Hard Left who is unfit to be trusted with national security decisions. Conversely, the views that Reagan vehemently rejected by words and by treaty -- that torture can be justified in some circumstances; that torturers should be shielded from prosecution; that other countries have no right to prosecute the torturers from other countries under "universal jurisdiction" -- are now not merely acceptable, but are required views in order to be not only a conservative, but to be a centrist. That's how severely the political spectrum and our elite consensus on these questions have shifted -- descended -- even from the time of the right-wing Reagan era when American exceptionalism and military aggression thrived.

Pew Forum did a poll on the correlation between religion and justification of torture:

More than half of people who attend services at least once a week -- 54 percent -- said the use of torture against suspected terrorists is "often" or "sometimes" justified.

White evangelical Protestants were the religious group most likely to say torture is often or sometimes justified -- more than six in 10 supported it. People unaffiliated with any religious organization were least likely to back it. Only four in 10 of them did.