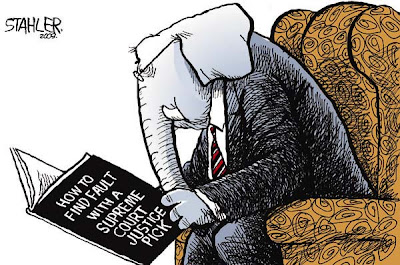 It was apparent even before President Obama named a Supreme Court replacement for Justice Souter that the GOP would oppose his choice. It really didn't matter who the nominee was. What mattered to the GOP was that Obama, a "screaming socialist liberal," was the one who would choose the nominee.

Judge Sonia Sotomayer has presented the GOP with a conundrum. How will they oppose her? She was of course nominated in 1991, by President George H. W. Bush to a seat on the U.S. District Court for the Southern District of New York.

In 1968 she was confirmed, with solid Democratic support, and support from 25 Republican Senators, for the seat she presently holds as a federal judge on the U.S. Court of Appeals for the Second Circuit.

The GOP's answer is to call Sonia Sotomayer ‘not the smartest’ and an ‘intellectual lightweight’.

The Booman Tribune responds to these allegations with a witty article which is on point, BrainPower: Karl Rove v. Sonia Sotomayor.

Karl Rove is just one of several Republicans that have chosen to call Sonia Sotomayor stoopid in a transparent effort to make her selection look like an affirmative action pick.

This morning on Fox News, Karl Rove questioned whether she was smart enough to be on the Supreme Court. “I’m not really certain how intellectually strong she would be, she has not been very strong on the second circuit,” he said.

In the fall of 1969, Rove entered the University of Utah, on a $1,000 scholarship, as a political science major and joined the Pi Kappa Alpha fraternity...

...In December 1969, the Selective Service System held its first lottery drawing. Those born on December 25, like Rove, received number 84. That number placed him in the middle of those (with numbers 1 [first priority] through 195) who would eventually be drafted. On February 17, 1970, Rove was reclassified as 2-S, a deferment from the draft because of his enrollment at the University of Utah in the fall of 1969. He maintained this deferment until December 14, 1971, despite being only a part-time student in the autumn and spring quarters of 1971 (registered for between six and 12 credit hours) and dropping out of the university in June 1971. Rove was a student at the University of Maryland, College Park in the fall of 1971; as such, he would have been eligible for 2-S status, but registrar's records show that he withdrew from classes during the first half of the semester. In December 1971 he was reclassified as 1-A. On April 27, 1972, he was reclassified as 1-H, or "not currently subject to processing for induction". The draft ended on June 30, 1973.