The Rebranding of the GOP 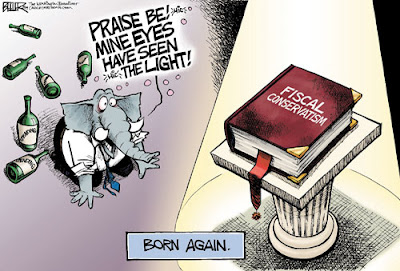 Top honchos of the Republican Party want to 'rebrand' or 'revive' the image of the GOP. They have launched a new group, The National Council for a New America (NCNA). Republicans behind the effort include:
Republicans told FOX News that the initiative is also meant to counter President Obama's portrayal of the Republicans as "the party of 'No.'" The forum, they say, will look to undo any public perceptions of the party as intolerant to new ideas.

The Mahablog says they don’t need a new initiative. They need new blood. Maybe even a whole new gene pool.

For example — At the New York Times, Adam Nagourney and David Herzenhorn write that Republicans are debating among themselves whether they should be working to create a bigger party or a purer party. Here’s a bit –

Patrick J. Toomey, a former head of the Club for Growth whose primary challenge to Mr. Specter led the senator to bow out in the face of what he thought was a probable defeat, said Republicans should be open to a “wide range of opinions on a wide range of issues.”

As Tbogg says, “As long as those ideas are lowering taxes on the rich, drill baby drill, keeping handguns cheap and plentiful, getting rid of capital gains taxes, and re-naming America ‘Reaganland’.”

“But I think fundamental common ground that the vast majority of Republicans share is the belief in limited government, freedom and personal responsibility,” Mr. Toomey said.

The question of how the party should respond to Mr. Specter’s departure was the main subject of a Senate Republican lunch on Wednesday. The party can be a “big tent,” said Senator John Ensign of Nevada, “but here are some core principles: fiscal responsibility, more personal responsibility, looking for a smaller, more effective government.”

In light of what Republicans actually do when they get their hands on the steering wheel of government, what are Mr. Toomey and Sen. Ensign actually saying?

“Fiscal responsibility” means lowering taxes on the wealthy and cutting programs that benefit the not-wealthy, but at the same time making sure the special interests that helped one get elected are well cared for.

“Personal responsibility” means government is to become primarily a tool for protecting the power and assets of the ruling plutocracy at the expense of the interests of the nation and its citizens.

Oh, and then there’s “freedom,” which is a system by which corporations are the landlords and citizens are the serfs/sharecroppers/tenants.

I’m betting that the Council’s town halls will not include anyone not a shill or a true believer.

If the Grand Old Party doesn't want to be known as the "party of 'No'"...they just need to learn how to sometimes say 'Yes!'
Posted by rross at 1:17 PM