"Ain't the Time to Close Your Eyes" 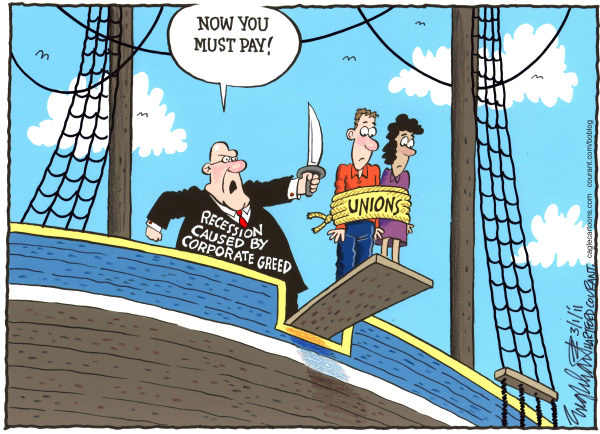 Republican talking points, regarding the Wisconsin collective bargaining-union busting issue, has emphasized that the Republican Governor, Scott Walker, was elected on a mandate of the voters. They say that 'he is doing what he was elected to do.' However a recent poll shows the reality of the situation, if the election were held today.

A Public Policy Polling survey released on Monday showed that if the Wisconsin governor’s election were held today, Walker would lose. A New York Times/ CBS News poll, also released on Monday, shows that 60% of Americans nationwide are against Walker’s plan to effectively end the collective bargaining rights of public employees.
That's right, Walker would lose the election. The reason is that the majority of Wisconsin voters , as well as the majority of voters nationwide, Americans don't want government officials to bust unions. They want rights for workers and they want the right of collective bargaining.

The Wisconsin protests are bringing American citizens together to stand up to the inequities of 'Big Government.' Yes, I said Big Government. Usually, the Republicans/Tea Party/Libertarians complain that 'government' is getting too big and is too invasive in our lives. What could be more invasive than the Governor, who represents the government, working to take away collective bargaining rights of workers. The Governor claimed these actions were necessary because of a budget crisis. The unions have agreed to all of the GOP's demands on wages and benefits, in exchange for Republicans dropping the provision that would strip them of the right to negotiate in the future. He won't accept any compromise and is now planning on laying off thousands of worker's to make his point.

As Joshua Holland notes, "Reporters who continue to portray this as a fight over wages and benefits are now committing journalistic malpractice."

Matt Wisniewski, a 23 year-old college student, filmed the protests as they happened and put together two videos setting the action to the sound. His second video is set to the sound of "The Cave" by Mumford and Sons.