GOP Lies and the Untold Truth 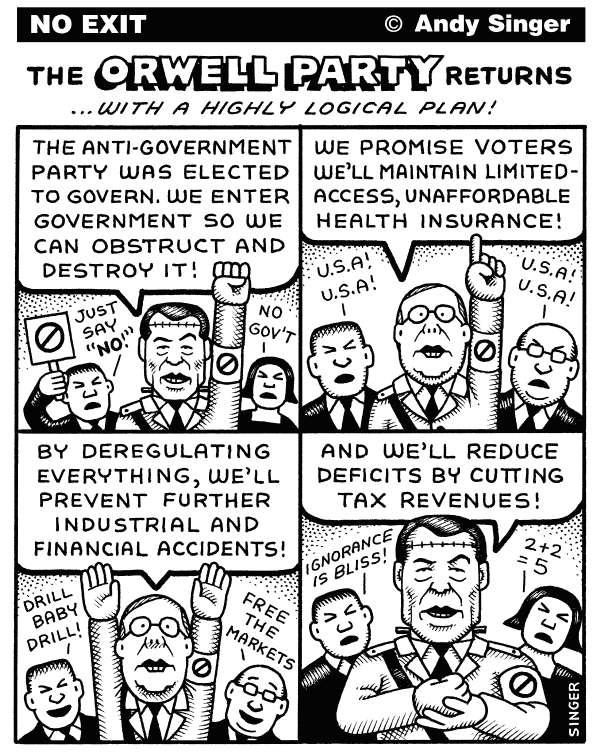 Robert Reich says that if the GOP keeps telling the same lies over and over, eventually they will become the truth. In Reich's article, The Republican's Big Lies About Jobs (And Why Obama Must Repudiate Them), he says that without the Democrats or President Obama coming out to tell the truth, the lies will become fact.

And if all others accepted the lie which the party imposed – if all records told the same tale – then the lie passed into history and became the truth.

But truth doesn’t seem to matter. Republicans figure if their big lies are repeated often enough, people will start to believe them.

Unless, that is, those big lies are repudiated – and big truths are told in their place.

What worries me almost as much as the Republican’s repeated big lies about jobs is the silence of President Obama and Democratic leaders in the face of them. Obama has the bully pulpit. Republicans don’t. But if he doesn’t use it the Republican’s big lies gain credibility.

Here are some other whoppers being repeated daily:

House Majority Leader Eric Cantor was in town yesterday (specifically, at Stanford’s Hoover Institute where he could surround himself with sympathetic Republicans) to tell this whopper: “Cutting the federal deficit will create jobs.”

It’s not true. Cutting the deficit will create fewer jobs. Less government spending reduces overall demand. This is particularly worrisome when, as now, consumers and businesses are still holding back. Fewer government workers have paychecks to buy stuff from other Americans, some of whom in turn will lose their jobs without enough customers.

Nope. Trickle-down economics has been tried for thirty years and hasn’t worked. After George W. Bush cut taxes on the rich, far fewer jobs were created than after Bill Clinton raised them in the 1990s.

To his credit, President Obama argued against Republican demands for extending the Bush tax cut for those making more than a quarter million. But as soon as Republicans pushed back he caved. And the President hasn’t even mentioned that the $61 billion Republicans are demanding in budget cuts this fiscal year is what richer Americans would have paid in taxes had he not caved.

Baloney. American corporations don’t need tax cuts. They’re sitting on over $1.5 trillion of cash right now. They won’t invest it in additional capacity or jobs because they don’t see enough customers out there with enough money in their pockets to buy what the additional capacity would produce.

The President needs to point this out – not just in Washington but across the nation where Republican governors are slashing corporate taxes and simultaneously cutting school budgets. President Obama says he wants to invest in American skills, but many states are doing the opposite. Florida Governor Rick Scott, for example, says his proposed corporate tax cuts “will give Florida a competitive edge in attracting jobs.” They’ll also require education spending be reduced by $3 billion. Florida already ranks near the bottom in per-pupil spending and has one of nation’s lowest graduation rates. If Scott’s tax cuts create jobs, most will pay peanuts.

Congressional Republicans and their state counterparts repeat this lie incessantly. It also lies behind corporate America’s incessant demand for wage and benefit concessions – and corporate and state battles against unions. But it’s dead wrong. Meager wages and benefits are reducing the spending power of tens of millions of American workers, which is prolonging the jobs recession.

President Obama and Democratic leaders should be standing up for the wages and benefits of ordinary Americans, standing up for unions, and decrying the lie that wage and benefit concessions are necessary to create jobs. The President should be traveling to the Midwest – taking aim at Republican governors in the heartland who are hell bent on destroying the purchasing power of American workers. But he’s doing nothing of the sort.

Congressional Republicans are using this whopper to justify their attempts to defund regulatory agencies. Regulations whose costs to business exceed their benefits to the public are unwarranted, of course, but reasonable regulation is necessary to avoid everything from nuclear meltdowns to oil spills to mine disasters to food contamination – all of which we’ve sadly witnessed. Here again, we’re hearing little from the President or Democratic leaders.

Look, the President can’t be everywhere, doing everything. There’s tumult in the Middle East, we’re suddenly at war in Libya, Japan is struggling with the aftermath of disaster, and surely Latin America is an important trading partner.

But nothing is more central to average Americans than jobs and wages. Unless the President forcefully rebuts Republican’s big lies, they’ll soon become conventional wisdom.

Tell the President and your Congressional leaders that this country was not built on lies. Revising history, creating chaos and undermining truth is the path to ignorance. 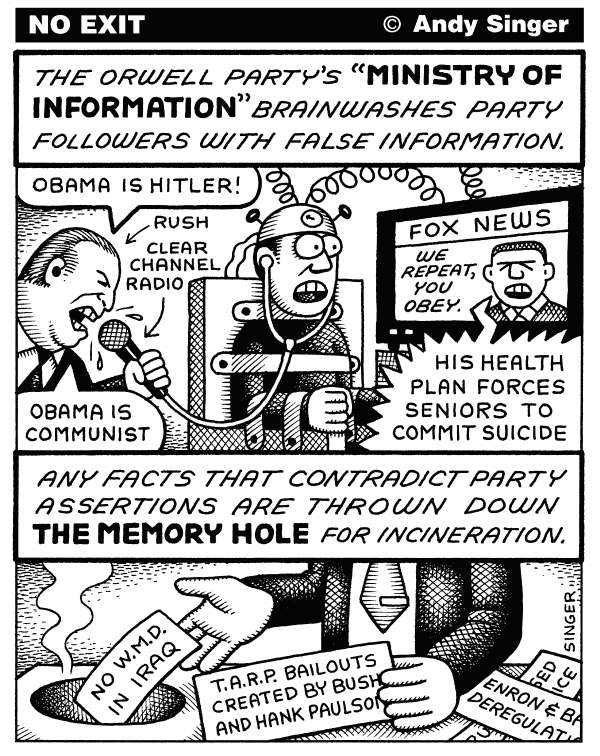