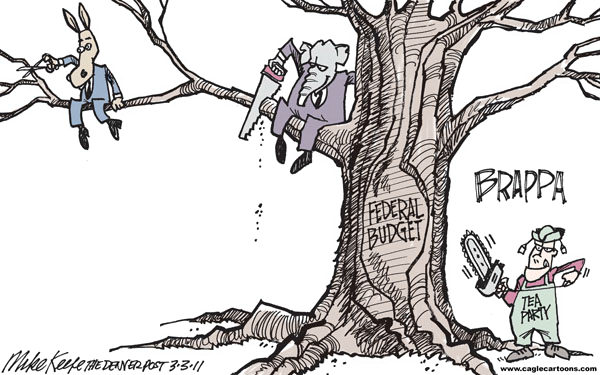 There's a classic line from the movie Philadelphia when Denzel Washington's character, attorney Joe Miller, says, "Would somebody please explain it to me... like I'm a six-year-old?" So, let me explain.

In a 1975 interview, Ronald Reagan, while speaking about the philosophies of conservatism and libertarianism, stated that, "The basis of conservatism is a desire for less government interference or less centralized authority or more individual freedom and this is a pretty general description also of what libertarianism is. The Republican mantra for the last two years has revolved around this concept of less government.

Generally, less government refers to less taxes and less regulation. So I am asking, would somebody please explain it to me... like I'm a six-year-old, why is the GOP in Wisconsin trying to ban prank calls?

In the wake of the prank-calling of Gov. Scott Walker by a journalist posing as conservative billionaire David Koch, a pair of Republicans in the Wisconsin legislature have proposed a bill that would actually make prank calls illegal.

That was the call in which Walker joked about "stereotypical blue-caller workers," revealed that he had considered planting troublemakers among the pro-labor protesters in Wisconsin, and generally buddied up to the eccentric (and fake) version of Koch that was on the line.

The Badger Herald reports on the details of the bill (note the strange nod in the first line to "legitimate uses" of spoofing):

“While use of spoofing is said to have some legitimate uses, it can also be used to frighten, harass and potentially defraud,” Lazich and Honadel said in an e-mail to legislators.

The bill language forbids a caller from intentionally providing a false phone number and convincing the person receiving the call that it comes from someone other than the actual caller.

I reached out to Ian Murphy, the Buffalo Beast editor behind the Walker prank call, for a reaction to all this. Said Murphy:

"This bill is a cowardly response to my prank on Walker, and that they deny this demonstrates, once again, the level of dishonesty to which Wisconsin's Republicans will stoop."

Less government can also involve less intrusion onto our private lives. Republicans have recently been outraged...OUTRAGED... over the government mandate requiring health insurance. So I am asking, would somebody please explain it to me... like I'm a six-year-old, why is the GOP in New Jersey, trying to take away money for abortions?

[Y]ou might be shocked to learn that while Republicans are directing a multifront assault on a government requirement to buy insurance, these House Republicans want to dictate what kind of coverage Americans can and can’t buy with their own money.

What issue could possibly prompt conservative Republicans to hammer away at bedrock precepts?

Not content with the Hyde Amendment making it impossible for federal money to go for abortions (except in extreme cases), not satisfied with complicated measures enacted to ensure no federal funds indirectly touch privately funded abortions, sponsors of a new bill are trying to use last year’s health-care overhaul to make it even less likely that insurers will offer abortion coverage to anyone.

It’s called the No Taxpayer Funding for Abortion bill, but don’t let the title fool you. The measure could curtail privately funded abortions, too.

Sponsored by New Jersey Republican Representative Chris Smith, it would void tax breaks given to companies and the self- employed for insurance premiums on policies that cover abortion. The idea is that by leaving more of your money in your pocket, the government is giving you some of its cash.

Nor could a woman pay premiums for such a policy with pretax, flexible-spending accounts. True, she earned every penny of that money, but if she’s not paying taxes on it, she can’t spend it on something anti-abortionists don’t like.

Smith would also make sure that no one who gets a federal subsidy under the new health-care law could sign up at an insurance exchange for a plan that offers abortion benefits, thus discouraging insurers from offering such policies even to the unsubsidized.

As for abortion riders for people willing and able to pay for the benefit, insurers reported last year that employers tend not to ask for them. It’s one thing to have a policy that covers it along with other unplanned injuries and illnesses, as most insurers do. But apparently not many people pay extra in advance just in case they have an unplanned, unwanted pregnancy.

Given the overblown rhetoric about the “nationalization” of health care, surely Republicans should oppose government dictates on what sort of policy an insurer can provide, an employer can offer and an individual can buy privately.

Where are we, Canada?

And then there’s the fact that this bill would invite the government to intervene in the most intimate of decisions, which should turn conservative thought on its head.

No, that principle, too, gets a blink when the issue is abortion.

Conservative talking heads, pundits and politicians are extolling the virtues of President Ronald Reagan for the concept of reducing the size of government. However, state legislatures want laws that expand the scope and extent of government in our lives, in order to stop behavior they don't like.

How can the party that attacks big government and wants less government then turn around and create more government with tentacles that extend directly into our offices, homes and bedrooms?

Would somebody please explain it to me... like I'm a six-year-old!
Posted by rross at 1:10 PM