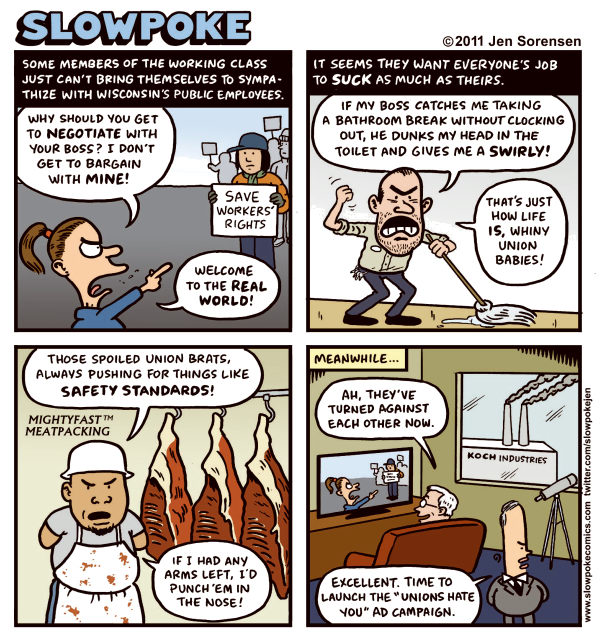 The US Supreme Court's 5-4 ruling in Citizens United v Federal Election Commission (2010) lays the foundation for the corporate takeover of America. This will be accomplished by false advertising, lies and misrepresentations being bought and paid for by big money corporations. Presently, the attempt at union busting being played out in Wisconsin, is merely the tip of the iceberg for corporate interests to gain control. Rodolfo F. Acuna expounds on this scenario in, The Buying of America...GOP's War on American Labor.


A reader responded to my article on the Arizona and Wisconsin connection that "... the Koch brothers are just the tip of the iceberg," - a statement with which I totally agree.

The Phoenix resident predicted that the corporate takeover of the state and federal governments had just begun. What would make this possible was "The Citizens United Supreme Court decision [that] will only make money laundering for public office worse, since there is no accountability measure to provide transparency about who is contributing to Tea Party or other candidates."

The US Supreme Court's 5-4 decision in Citizens United v Federal Election Commission (2010) held that the First Amendment requires that "Congress shall make no law ... abridging the freedom of speech," and that a "prohibition on corporate independent expenditures is an outright ban on speech." According to the Court, "A PAC [political action committee] is a separate association from the corporation." Because speech is fundamental to democracy, the regulation on spending infringes on political speech.

In essence, Citizens United gives corporations and unions the right to spend unlimited amounts of money on campaign ads - no matter how outrageous the ads are. The case struck down campaign reform, and a provision in the law that prohibited all corporations and unions from contributing as much money as they wanted to elections. The outcome is that the rich are protected by the First Amendment and have the right to buy elections.

President Obama criticized the decision, saying that it "Gives the special interests and their lobbyists even more power in Washington while undermining the influence of average Americans who make small contributions to support their preferred candidates."

Even more outrageous, the decision shields rich contributors by giving them anonymity. While corporations or unions may not give money directly to campaigns, they have a license to place an unlimited number of ads, and by forming "501(c) (4)s" nonprofits, the identity of the donors is hidden.

In Arizona, David H. Koch and Charles G. Koch set the template that is being followed in Wisconsin. They funded extremist groups and spread hate through lies and half-truths, allowing them to manipulate elections.

Given these facts, it is hard not to recognize a conspiracy between the Koches and the five Supreme Court Justices that formed the majority in Citizens United.

For example, on January 30-31, 2011, the Koches held a secretive retreat for billionaires in Palm Springs, California. Featured speakers at past billionaire juntas were Supreme Court Justices Antonin Scalia and Clarence Thomas, two of the five majority justices in Citizens United. Thomas' wife is the founder and president of Liberty Central, a conservative political advocacy group with ties to the Tea Party and the infamous Koches.

The corporate assault on democracy began as far back as 1868 with the passage of the "due process clause" in the 14th Amendment. Its intent was to protect the rights of African-Americans by protecting them from the southern states that wanted to keep them in a de facto state of slavery. Instead of enforcing the amendment and giving blacks equal protection, pro-business justices expanded the 14th amendment to shield corporations from state and federal regulation. They raised the legal fiction that corporations were persons and thus a protected class.

Since the 1980s, corporations, dominated by the billionaire class, have become more proactive in politics. Emboldened by William E. Simon's ghost-written "A Time for Truth" (1978), the right wing has founded a bevy of tax-free non-profits to fund right-wing causes.

As of 2007 there were 2.7 millionaires and 371 billionaires in the United States out of a population of 307 million Americans - less than one percent. The Koch brothers had only two votes, but had a combined wealth of $41 billion dollars.

The golden opportunity for the Koch cabal came in Gore v. Bush (2000) that resolved the presidential election in favor of George W. Bush. The Court ruled that the Florida Supreme Court's method for recounting ballots violated the Equal Protection Clause of the Fourteenth Amendment. The 5-4 decision was a political decision with Thomas and Scalia heading the majority.

Gore v. Bush made the Citizens United case possible, as Bush became president, and he proceeded to stack the Supreme Court as well as the lower federal courts with right-wing ideologues. He nominated John Roberts and Samuel Alito to the Court - both judicial conservatives with deep right-wing ties.

These two justices joined Scalia and Thomas in the passage of Citizens United, which represented an extreme departure from previous case law.

In Arizona the billionaire club used the Tea Party, the Minutemen and the Nazis to spread fear, misinterpretation and gross stereotypes. Like Professor Rudy Rosales has pointed out, "This attack [is] on working class people, Mexicanos and Latinos all over, African-Americans, Native Americans, Asians, women, gays, homosexuals, [and it] is possible because they do it piece by piece - first immigrants, then gays, then women, then African-Americans."

Their goal is to destroy the liberal capitalist state.

Because of Citizens United, in future elections voters will be unable to tell where the money is coming from. The 2006 election cost about $1 billion; the cost of the 2010 election was over $3 billion. It turned blue states red. The cost of the 2012 presidential campaign will dwarf these numbers. Everyone is up for sale.

Eric Drum in Mother Jones (March/April 2011) writes that, "With unions declining, the Democratic Party turned to the only other source of money and influence available in large enough quantities to replace Big Labor: Big Business."

The question is, "Who will control the country?" 371 billionaires, or the other 307 million residents of this nation?

It is important for all Americans who believe in Democracy to stand with the protesters in Wisconsin. This is the beginning!
Posted by rross at 2:38 PM