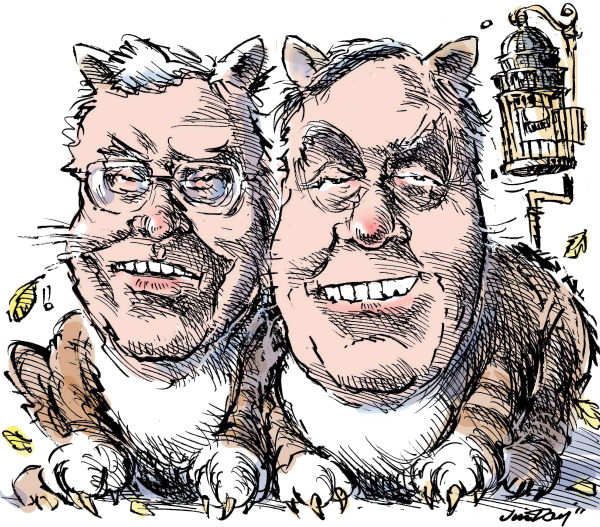 The Koch brothers, fat cats Charles and David, commonly cite statistics from front groups that they finance for the information they proffer. The common goal of every Koch underwritten group is to "attack workers’ rights, promote deregulation, and argue for radical supply side economics."

Koch Industries, the international conglomerate owned by Charles and David Koch, is not only the second largest private company in America, it is the most politically active. As ThinkProgress has carefully documented over the last three years, Koch groups have spent tens of millions to influence government policy — from financing the Tea Parties, to funding junk academic studies, to undisclosed attack ads against Democrats, to groups promoting climate change denial, to a large network of state-based and national think tanks. In an opinion column for the Wall Street Journal today, Koch Industries CEO Charles Koch fired back at his critics, who have grown more vocal as it has become clear that Koch groups are providing the political muscle for Gov. Scott Walker’s (R-WI) union-busting power grab.

In his piece, Charles portrays himself as simply an ideological advocate, and says his money to political groups is only meant to “enhance true economic freedom.” He chides special interests that have “successfully lobbied for special favors,” claiming “crony capitalism is much easier than competing in an open market.” But in reality, the focus of the Koch political machine is geared towards “crony capitalism” — corrupting government to make Charles and his brother David Koch richer. Koch’s Tea Party libertarianism is actually a thin veneer for the company’s long running history of winning special deals from the government and manipulating the market to pad Koch profits:

– The dirty secret of Koch Industries is its birth under the centrally-planned Soviet Union. Fred Koch, the founder of the company and father of David and Charles, helped construct fifteen oil refineries for Joseph Stalin before expanding the business in the United States.

– As Yasha Levine has reported, Koch exploits a number of government programs for profit. For instance, Georgia Pacific, a timber company subsidiary of Koch Industries, uses taxpayer money provided by the U.S. Forestry Service to provide their loggers with taxpayer-funded roads and access to virgin growth forests. “Logging companies such as Georgia-Pacific strip lands bare, destroy vast acreages and pay only a small fee to the federal government in proportion to what they take from the public,” according to the Institute for Public Accuracy. Levine also notes that Koch’s cattle ranching company, Matador Cattle Company, uses a New Deal program to profit off federal land for free.

– The Koch brothers have claimed that they oppose government intervention in the market, but Koch Industries lobbies aggressively for taxpayer handouts. In Alaska, blogger Andrew Halcro reported that a Koch subsidiary in Fairbanks asked Gov. Sarah Palin’s administration to use taxpayer money to bail out one of their failing refinery.

– SolveClimate recently reported that Koch Industries will reap huge profits from the proposed Keystone XL Pipeline, which runs from Koch-owned tar sands mining centers in Canada to Koch-owned refineries in Texas. To build the pipeline, politicians throughout the Midwest, many of whom have received large Koch campaign donations, have used eminant domain — government seizures of private land. In Kansas, where Koch-funded officials advise Gov. Sam Brownback (R-KS) and the Republican legislature, the Keystone XL Pipeline is likely to receive a property tax exemption of ten years, a special loophole that will cost Kansas taxpayers about $50 million.

– Koch Industries has been the recipient of about $85 million in federal government contracts mostly from the Department of Defense. Koch also benefits directly from billions in taxpayer subsidies for oil companies and ethanol production.

Charles has compared himself to a libertarian “Martin Luther,” evangelizing to the world for their supply side cause. However, the tens of millions in campaign donations and the dozens of front groups funded by Koch work in tandem to promoting the business interests of Koch Industries.

Koch funds both socially conservative groups and socially liberal groups. However, Koch’s financing of front groups and political organizations all have one thing in common: every single Koch group attacks workers’ rights, promotes deregulation, and argues for radical supply side economics. Not only do the Koch’s front groups pad Koch Industries’ bottom line, they supply the Koch brother’s talking points. In fact, for his opinion piece today, Charles heavily relied on front groups he finances for statistics. The “freedom index” cited by Charles is a creation of the Koch-funded Heritage Foundation, and the erroneous “unfunded liabilities” claim was supplied by the Koch-funded National Center for Policy Analysis.

The Koch brothers say they oppose government intervention in the finance market. But their actions and those of their national and state think tanks are working toward intervention to stop regulation of the market and inhibit worker rights. While at the same time they want government bailouts and subsidies for the corporations.
Posted by rross at 5:00 PM