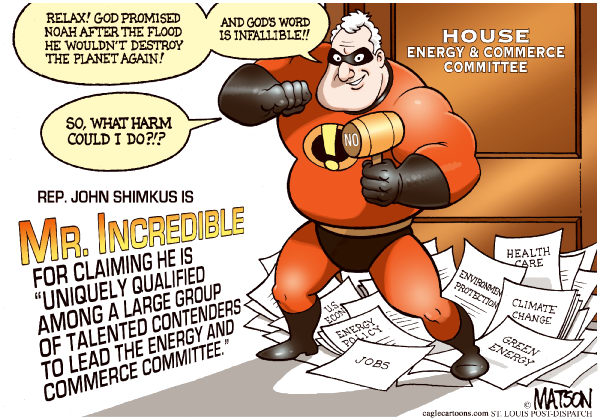 An anti-science mania has taken over the GOP! Law Professor Robert Benson argues that "being vocally anti-science has become the defining mark of a current style of politics, an intentional ignorance that recalls the Scopes Monkey Trial."

The Second Coming of Science

You’ve got to go back to the Scopes Monkey Trial of 1925 for a precedent to the anti-science mania that is currently sweeping the GOP. Then, the issue was teaching Darwin’s work on evolution in the schools. Today, the issue is global warming. Then, as now, large numbers of politicians tapped into the stratum of popular culture that simply rejects science as the basis for public or personal decisions. The chief prosecutor of high school teacher John Scopes, William Jennings Bryan, gloated that literal interpretation of the Bible trumped scientific knowledge. This resonated with large masses of ordinary folks, the ones H. L. Mencken and the liberal press were calling “yokels” and “morons.”

Turns out the yokels and morons won, at least for a generation. Scopes was found guilty of violating the Tennessee law that prohibited teaching evolution, and his conviction (though later overturned on a technicality) galvanized the anti-evolution movement for years. Politicians came pouring in. Scores of resolutions were introduced in state legislatures and school boards all over the country, setting back the teaching of evolution for decades until logic and reason and the scientific method gradually reasserted themselves in the culture.

The 1925 Anti-Science Climate of Today

Today, Republicans are falling over themselves in a rush to ridicule the science that shows our use of fossil fuels is producing greenhouse gases that are warming the planet to disastrous levels. These findings were confirmed even by the Bush administration before it left office, as well as by the U.S. National Academy of Sciences and every other significant scientific academy around the world, not to mention the unpaid global work of hundreds of volunteer scientists for the Intergovernmental Panel on Climate Change.

But anti-scientists are undaunted by facts. More than half of the incoming Republican caucus denies the validity of climate change science. Some 74 percent of Republicans in the U.S. Senate now take that stance, as do 53 percent of GOP in the House. Here’s a sampler of what some of their leading illuminati have to say about it:

“I personally believe that the solar flares are more responsible for climatic cycles than anything that human beings do. …” — Rep. Jim Sensenbrenner, Wisconsin

“Nobody really knows the cause. The earth cools, the earth warms … It could be caused by carbon dioxide or methane. Maybe we should kill the cows to stop the methane, or stop breathing to stop the CO2 … Thousands of people die every year of cold, so if we had global warming it would save lives … We ought to look out for people. The earth can take care of itself.” — Rep. Duncan Hunter, California

“There was a report a couple of weeks ago that in fact you look at this last year, it was the warmest year in the last decade, I think was the numbers that came out. I don’t — I accept that. I do not say that it is man-made.”Rep. Fred Upton, Michigan —

“The greatest hoax ever perpetuated on the American people.” — Sen. James Inhofe, Oklahoma

Rep. John Shimkus of Illinois says we need not worry about the planet being destroyed because, citing chapter 8, verse 22 of the Book of Genesis, God promised Noah it wouldn’t happen again after the great flood.

Sen. John McCain co-authored a good global warming bill when running for president in 2008. But he did a 180-degree turnabout when running for re-election to Arizona’s Senate seat two years later, suddenly saying, “There’s great questions about it that need to be resolved.”

The Tea Party and its allies had made it unacceptable to the GOP base to be anywhere except pandering to the anti-science crowd.

None of this would have surprised historian Richard Hofstadter, who won a Pulitzer in 1964 for his book Anti-Intellectualism in American Life. Starting with the colonies, Hofstadter shows how the vast underlying stratum of anti-elite, anti-reason, anti-science Americans has frequently erupted into political and cultural action. These are folks who never heard of the Enlightenment of the 18th century, and do not experience a lot of reason, logic or the empirical method in their daily lives. They live by “common sense,” personal relationships and superstition. They have always been with us, and there are a lot of them.

Their outburst into today’s anti-science global warming mania would just be the latest chapter in Hofstadter’s book.

The Rise of Idiot America Today

You might think that the revolution of Internet-blogging-networking technology would work to spread sound scientific knowledge more broadly, but you would be wrong. The new technology spreads a cacophony of voices in which the pre-Enlightenment folks are not only equal but more numerous and dominant than the voices of reason.

Journalist Charles Pierce not long ago wrote an essay on “Idiot America,” followed by a book of that name, in which he argued that “the rise of Idiot America today represents — for profit mainly, but also, and more cynically, for political advantage and in the pursuit of power — the breakdown of a consensus that the pursuit of knowledge is a good. It also represents the ascendancy of the notion that the people whom we should trust the least are the people who best know what they’re talking about. In the new media age, everybody is a historian, or a preacher, or a scientist, or a sage. And if everyone is an expert, then nobody is, and the worst thing you can be in a society where everybody is an expert is, well, an actual expert.”

Moreover, the new technology is not working alone. You have the likes of oil interests such as Koch Industries and Exxon Mobil funding a phalanx of anti-science spokesmen, think tanks and lobbyists. They put their money into sowing doubt about the scientific consensus, as many of these same people did on tobacco, ozone and acid rain, playing on the fact that the way science works is to set up repeated challenges of the evidence by peers but ignoring that scientific consensuses do indeed exist — otherwise, we would not have made the progress we did on tobacco, ozone and acid rain.

Sheltered by the technological cacophony and the big money available, politicians feel unashamed to stand in front of the National Academy of Sciences and virtually every climate scientist in the world and utter irrational things like “God promised Noah …,” or “solar flares,” or “nobody really knows,” “not man-made” or “hoax.”

“[The deniers’] goal is to create the perception that fundamental aspects of climate science are controversial,” write several scientists connected to the National Academy. “They are not.”

“All their claims, all the studies cited and all the evidence they have presented has been thoroughly reviewed by climate scientists. There is no scientific basis for contesting the academy’s finding.”

We are in Tennessee again, 1925, in the grip of the anti-scientists and their politicians. We will lose a generation in dealing with greenhouse gases. Yet the science says we have only a few years. 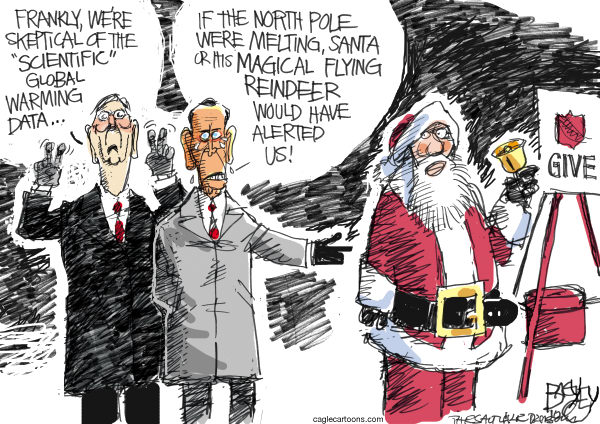